Cody and the Peacocks 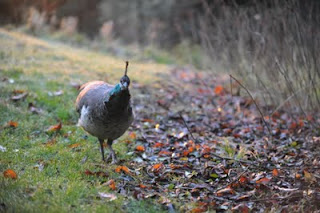 A few years ago I had a cat, a really different sort of cat. More of a cat-dog, because he was totally fearless and very friendly at the same time. He would go for rides in the car with me, sit on my lap and look out the window, enjoying the ride. Strange and wonderful cat! His name was Cody.

I often took him to a friend's house in the country. I called this place God's Green Acre because it was in the middle of the sage brush desert in Oregon and yet they had planted and watered until it was a true oasis. They had all sorts of animals: goats, sheep, pigeons, horses, llamas, peacocks. Cody loved to go visit there, he would sniff noses with the baby goats and then reach his paw up under the fence and pat their faces. And they let him!

My friend and I were picking gooseberries one afternoon and Cody was nearby playing. Pretty soon we saw the peacocks moving in, slowly, checking him out. He hid under bushes, pretending to hide and then when the peacocks got close enough, he would jump out and they would leap straight up in the air about a foot and run away, pretending to be scared. Then the whole thing would start again. This went on for over an hour and all the peacocks on the place got into the game, Cody pretending to hide, they pretending to be afraid. I've never seen anything quite like it before or since.

I've often wondered how Cody could pull that off in a potentially dangerous world. He was a fine example of fearlessness and detachment while remaining open to experience.
Posted by Randy Sandknop at 9:37 AM 1 comment: