A friend of mine has resolved to stop smoking, cold turkey, at midnight tonight. He hasn't done any planning, hasn't cut down, isn't going to use patches or gum or a support group. I'm standing by to see what happens. I'd love it if he succeeds but the odds are stacked against him. It takes more than a date on the calendar to undo 40 years of addiction!

My son has resolved to be more responsible with the small details of his life and stop avoiding them. He doesn't appear to have a plan for how to do that, just a vague idea that a pocket calendar will do the trick. There too, I'm standing by to see what happens.

As for me, even though I don't consider it a New Year's resolution, I intend to be more active with blog posts. It's so easy to think about writing but harder to actually sit down and do it. I figure I can ease my way into it by committing to one blog post a week, thus increasing my blogger productivity by 1000% without too much effort.

But what's my plan to make that one blog post per week a reality? I'll watch for things to blog about in my journal writing and in my life experiences. I'll remember that I don't have to write a book, just a blog post, a few paragraphs or maybe a little more will do the trick.

So here's my commitment: Every Friday I will get a new blog post up and then announce it to my list and my Facebook friends and fans.

And then I'll stand by to see what happens as I take action on this intention! An action plan should take the trickiness out of New Year's resolutions.

Please share your comments or ideas on this timely subject!
Posted by Randy Sandknop at 2:51 PM 1 comment:

Instructions for Happiness in 2010 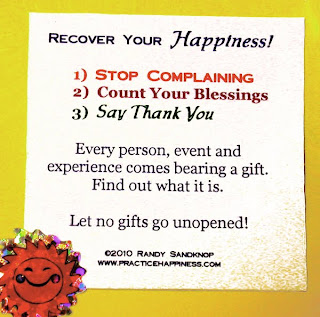 My dad died last January at the the age of 80 and I created this refrigerator magnet as an anniversary gift of sorts, honoring his transition.

All his life, my dad struggled with health issues and highly negative thought patterns. He contracted rheumatic fever in his early teens which weakened his heart. He worked hard as a laborer, specializing in concrete for buildings and highways, and by 1997, his poor heart had had enough and he had open heart surgery and 2 new artificial valves installed. In 2000, depression hit hard and he decided to throw in the towel on life.

Giving up living is easy but actually exiting is hard. He was very vocal about his desire to die and he complained incessantly for the next 8 years.

In April of 2008, Dad took a turn for the worse and went into the hospital. Mom asked me to come help because it looked like he was finally going to get his wish. I drove the 250 miles to their town and settled in for 7 of his 10 days in the hospital. I spent most of my time with him, stayed the night a few times to help the nurses --- turned out Dad was still plenty strong, too strong to let go AND he was a terrible patient, couldn't be made comfortable, complained all the time about everything. He drove the nurses crazy.

The morning after one of those long, bad nights, I snapped. I couldn't take it any more! I delivered a detailed lecture on quantum theory, Law of Attraction and the power of thoughts at 6am in a quiet hospital room in Eastern Oregon. Near the end of the lecture, I wrote these instructions on the dry erase board handily hanging on the wall at the end of his bed where he had to look at it day and night:

We went over the details of each step, how complaining had become a habit that he didn't notice anymore and how a lifetime of complaining had given him a life to complain about. We held up our fingers and started counting blessings and even in his condition there were many! He agreed to say thank you to every person who walked into his room because the only reason they were there was to help him in some way.

I left the instructions on the board for the rest of his stay. I can't say that he had an amazing turn-around in his health but his complaining dropped off considerably, he willingly participated in blessing-counting sessions and he said thank you so often to everyone, the hospital staff commented and were amazed. The nurses asked if they could write those steps on everyone's boards and we all laughed, knowing it wasn't possible.

He lived another 10 months after that and he practiced the steps even when it was hard. He said thank you more in that 10 months then he had in the 80 years before and I was very proud of him. His last words to me were "I love you, dear." What a treasure!

I've thought of that morning lecture many times since then and I'm often tempted to be sorry for it. After all, he was a sick old man in a hospital bed and he couldn't get away from me. However, that event changed both of our lives and I'm forever grateful for whatever power inspired the words and the energy that poured out of me that morning.

I've shared this story verbally many times and those who have taken up the practice have experienced benefits. It's pretty easy to count blessings and say thank you but stopping the complaining is really hard! It's become a part of our culture to complain, judge and criticize everything around us. The trick seems to be training ourselves to notice when we're doing it, to actually hear what we're saying and/or thinking.

Thank you for reading this story and sharing in the magic gift that came from my dad's last struggles. This story is my gift to him. And this magnet is our gift to you.

To get your magnet (up to 5), send me a private message ( http://www.facebook.com/randysandknop ) with your address and I'll mail it out. The stamp is on me! See the details in the Event section of the Practice Happiness! fan page, My Gift To YOU!
Posted by Randy Sandknop at 10:32 AM 1 comment: